To recognize local military personnel and honor them for their service, Bear Chase Brewing Company will host Military Appreciation Day on Sunday, November 14th from 12:00 – 5:00 PM. This FREE event aims to create awareness of the sacrifices our brave military men and women make for our country, and will raise money to support several Gold Star families and the Boulder Crest Foundation – an organization that provides combat veterans, first responders and their families with training and support to foster lifelong posttraumatic growth.

The event will feature live music with musical guests Byron Shepard & Frogtown, Low Water Bridge Band and Nathaniel Davis.  As always, delicious food and beverages will be available for purchase, including  Bearing Honor, a collaboration brew with Honor Brewing Company that will be released for this special event. 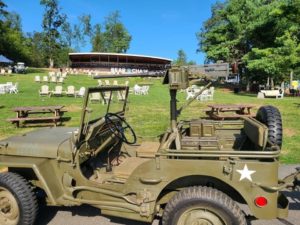 Other organizations participating in the event will include:

Additionally, multiple retired combat veterans will be in attendance, including 93 year-old retired Master Sergeant Harry Miller, who fought in World War II, Korea and Vietnam. We will also have several military vehicles and artillery on display, including a howitzer cannon from World War II, which we plan fire off (safely) at some point during the afternoon.

Come honor our military and support a great cause by joining the fun at Bear Chase Brewing Company on Sunday, November 14th –  we hope to see you there!

Vote for Bear Chase for Best Brewery in Loudoun