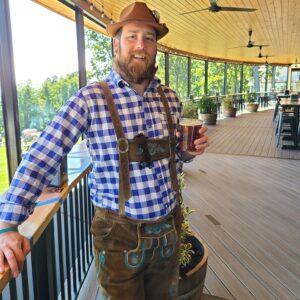 Time for all of you to break out your finest lederhosen and dirndls!

This Saturday is Oktoberfest on the mountain!

Our ceremonial tapping will be held on Friday, September the 9th at 6 PM, with the tapping of our custom built wooden barrel from Germany. You can speculate on how many times our brewer, Charles, will have to hammer the tap and enjoy the first glasses of our double Gold medal award winning Oktoberfest lager! This will kick off our Oktoberfest weekend and season with German food specials and entertainment for the whole family, just like the one in Munich! 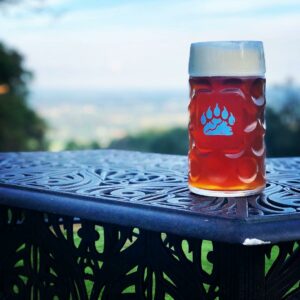 The original Oktoberfest was to celebrate a wedding between King Ludwig and Princess Theresa on October 12th, 1810. The event was held on a field outside the city gates of Munich which was named Theresienwiese (Theresa’s Meadow) in her honor. The event was later moved forward to take advantage of the nicer weather and now runs from around the 16th of September to the first Sunday in October unless that falls before the 3rd, in which case it is extended to the 3rd to include German Unity Day.

The modern ceremonies start with a 12 gun salute followed by the tapping of the first keg of Oktoberfest beer by the Mayor of Munich at noon on the first day, who then declares  “O’zapft is” — “it’s tapped.” and then pours the first litre for the President of Bavaria. Only then can the beer be served at the festival. A popular thing is to bet on how many strokes it takes the Mayor to hammer the tap into the barrel. The record held by two Mayor’s is 2 strokes and the worst ever was someone who needed to hit it 19 times to tap it! The event in Munich is actually more like a county fair than a crazy party. The beer drinking is largely confined to the brewery tents (large structures that can seat 10,000 people!). There are amusement park rides and games and vendors. It’s set up so that one can bring the family and enjoy it just like a fair.

Our Oktoberfest is a traditional German style Marzen lager. It’s malt forward but very well balanced and a smooth, easy drinking beer. We have won Gold in the German Marzen category
at the Great American Beer Festival in 2019 and 2021.

Nearly 2 million gallons of beer are expected to be consumed at Oktoberfest this year.

It might seem touristy but over 80% of the attendees at the festival are German. The largest group of visitors from abroad are Americans who comprise about 14% of the total attendees.

We look forward to raising a Bear Chase stein with you this weekend, filled to the top with Marzen!