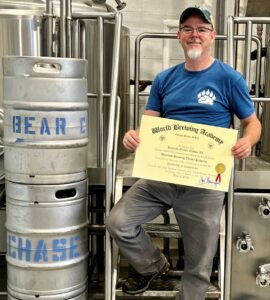 graduation from the Advanced Brewing Theory Program at the World Brewing Academy.

“Taking this course has given me the knowledge and skills needed to help Bear Chase grow to the next level,” Wilson explained. “Continued education is key in transforming our company from a small brewery in Eastern Loudoun County to a larger microbrewery.”

Wilson dedicated nearly a year to this intense course through the Siebel Institute of Technology, spending 25 hours a week in lectures and chat sessions focused on advanced commercial brewing techniques, packaging raw materials, quality control, and sanitation. But his favorite part of the program was the course on yeast management.

“As many brewers like to say, ‘we just make wort…the yeast makes the beer.’ Through this course, I learned that yeast plays such an important role in brewing, and I learned to understand the life cycle of yeast and how much they contribute to making beer,” he said.

Besides this latest diploma, Wilson also holds a Sommelier Certification through The Culinary Institute of America and an Associate’s Degree in Culinary Arts from The Culinary Institute of America, and he is a graduate of the Hospitality Management Program at the Harvard School of Business. With a background in high-end catering, Wilson turned his 25-year-long hobby of creating small-batch craft beers into a career when he joined Bear Chase in 2018. Although he was initially self-taught in crafting beers, he found that brewing was similar to creating culinary dishes.

“Just like cooking, making craft beer is very hands-on and an extension of my personality,” he said. “I get to create a high quality product for people to enjoy.”

Although he enjoys plenty of professional accolades, Wilson feels his greatest accomplishment is having two awesome daughters and a wife who takes care of him.

Stop by Bear Chase any time to try some of Ken’s latest creations!